I am so excited that I have written my first book! It's called, "PUT YOUR HANDS UP! AN ARREST WARRANT FROM GOD". It's my personal testimony about how I went from being an atheist cop to a Christian cop. The concept of the book is to show what type of environment I grew up in and how God brought me through circumstances to the point where finally someone approached me to tell me about Jesus. 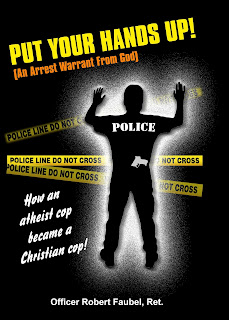 We live in a world that is growing slowly away from God as the Bible had predicted  My home life was void of any Godly influence especially since my father was a German atheist! But my mother was an Irish Catholic! I can't explain that one! I won't go into it here basically because I want you to buy the book! The goal was not to make money but to get my testimony out as Jesus told us to do.

God created us with the ability of free choice and along with that attribute comes the ability to be influenced either by choice or by no choice. No choice doesn't mean to be forcefully influenced but influenced in a way that you might not be aware of. Just watching TV can influence you. Years ago there was a situation called "subliminal advertising" which is now illegal where movie theatres could put one frame of a picture of a particular refreshment they were selling in one frame of the film. Your eye couldn't see it but your mind did! It would make people thirsty or hungry where they then would go out to the lobby and buy the items! It still might be used in different places today.

But the point that I'm trying to make is that we are influenced, good and bad, and that influence will eventually show up in our lives. That is what happened to me. I was influenced by my father, school, the NAVY and college to believe that there was no God. So pick up the book and try to get it to someone who does not have a relationship with Jesus. Let the book influence someone! It is sold on Amazon right now. $9.99 won't break the bank! Here's a link to Amazon:  https://www.amazon.com/s?k=put+your+hands+up+an+arrest+warrant+from+god&i=stripbooks&crid=SXM05WL5Z52F&sprefix=put+your+hands%2Caps%2C157&ref=nb_sb_ss_i_1_14


Posted by Chaplain Bob at 2:47 PM No comments: