There's No Cops in Heaven.

Hold it! Before you draw your weapons at me, read on. As a former atheist, becoming a Christian was a big thing. After all, I was a cop packing my Baretta and other weapons to do my job. Each day I faced a myriad of problems that could arise at a split second. I dealt with reality each day. What did I care about heaven or God?

Then came that day when I decided to check this "Jesus thing" out. I had NYPD officers(and others)  telling me about the Bible and what Jesus could do for me. Initially, I told them to put the Bible where the sun don't shine. That did not bother them at all! I thought they were all screwed up! Over a period of time, I began to seriously consider what brother officers were telling me about Jesus Christ until I said the prayer asking Jesus to run my life. To say the least, life changed drastically!

To make a very long period of time shorter, I did a lot of studying and reading the Bible. I listened to many teachers and preachers and realized that the Bible was in fact the inspired word of God. But during this time I came to a very "eye-opening" conclusion. There are many religions and denominations all saying they are going to heaven. People think that because they are nice, they too will see God. But when you read the Bible. you find something of importance that denominations won't tell you. They are not in the Bible!! The names of religions and denominations are all man made up! 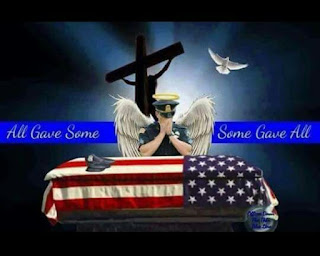 Man has given titles to everything not just religion but in all aspects of life. It's not the titles of people who go to heaven but only the people who have given their lives to Jesus Christ irregardless of what title they may have had. So to say that there are no cops in heaven is true because those titles don't exist there. BUT they also don't exist in hell! When you die, those titles either fall off going to heaven or they burn off going to hell! So you can say that Catholics, Methodists, Baptists, etc. all don't go to heaven because it's not their religions that get them there but their relationship God. Have they accepted Jesus as Lord?

The bottom line is that you don't let strangers in your house and neither does God! My badge won't get me to heaven but only my relationship with His son Jesus Christ. Where is your relationship with God? He sent His son down here for a reason! If you died today, where would you spend eternity?
Posted by Chaplain Bob at 4:17 PM